Listen to the Audio

For the past several weeks, I shared about three of my four food dealbreakers mentioned in my book, DREAM Wellness: The 5 Keys to Raising Kids for a Lifetime of Physical and Mental Health. These are corn syrup, artificial sweeteners and hydrogenated oils. As promised, this week I will let you know why artificial food dyes (coloring) made that list and how to avoid them.

While these are not the only ingredients you should consider avoiding, if you want your body to look, feel and function the way you desire, then there is no place for these items in your or your family’s diet, PERIOD.

What are artificial food dyes?

Artificial food dyes are synthetic, chemically engineered petroleum pigments that provide various food and beverages with vibrant colors. Yes, the same petroleum that is made from crude oil that also makes gasoline and paves the highways.

Artificial food dyes have no impact on taste and offer no nutritional value to the item. They simply make candy, cereal, vitamins, and snacks more aesthetically pleasing to the eye. At the same time, some research and a plethora of anecdotal evidence demonstrates that they can lead to a litany of health issues including cancer, behavioral problems, hypersensitivity reactions and ADHD1.

If you and your children are consuming foods that have bright colors, and they are not fruits or vegetables (or derived from them), there is a good chance that they contain artificial food dyes. They are found in thousands of products such as sports drinks, baked goods, sodas, breakfast cereals, candies, snack foods, frozen desserts, salad dressings, and even pickles. Heck, even smoked salmon and conventional (non-organic) fruits such as oranges are often bathed in dyes to brighten their color. Even more concerning, they are often used in certain vitamins and medications, including those designed to treat behavioral and hyperactivity issues.

It has been estimated by multiple sources that the consumption of food dyes has increased by over 500% in the past 50 years. And guess who the biggest consumers are… that’s right, children!

While U.S. regulatory agencies like the Food and Drug Administration (FDA) deem artificial food dyes to not pose significant health risks, they openly acknowledge that some of the ingredients within the dyes have been shown to be cancer causing and affect some children’s mental health and behavior. For example, Red 40, Yellow 5, and Yellow 6 contain benzidine, a known human and animal carcinogen. They just claim that the potentially harmful ingredients are in “safe” amounts.

The artificial food dyes most likely found in your food items are:

Red No. 40 (Allura Red): A dark red dye that is used in sports drinks, candy, condiments and cereals.

Yellow No. 5 (Tartrazine): A lemon-yellow dye that is found in candy, soft drinks, chips, popcorn and cereals.

Yellow No. 6 (Sunset Yellow): An orange-yellow dye that is used in candy, sauces, baked goods and preserved fruits.

A few other dyes are approved in some countries but banned in others.

Green No. 3, also known as Fast Green, is approved by the FDA but banned in Europe2.

Food Dyes Around the World

You will probably find it quite interesting to know that many artificial food dyes are banned in certain countries; and for those where they aren’t all banned like the United Kingdom, they contain warning labels about the potential adverse effects. This is especially true when they are used in children’s food, alerting consumers about potential hyperactivity issues.

When I looked at many of the countries that have these bans and warning labels, I noticed something that they all had in common; the government pays the healthcare costs for their citizens. In this commentary, I am in no way endorsing socialized medicine, as there are many problematic features to such a system. The point I am making is, when you have a nation that foots the bill for the healthcare costs, that government will want to ensure their citizens stay healthier. It’s simple economics.

In the U.S., however, it is the special interest groups that fund the campaigns of the lawmakers, and most lawmakers trust the “science” handed to them by the very same people who stand to make a profit. And because the costs of treating the unhealthy mostly rests on the shoulders of private insurance companies (as opposed to the government), their primary concern is not the health of the people.

I know, this sounds very cynical, especially coming from me, a very positive and optimistic person. However, I have been very involved in local and national politics, and I have witnessed firsthand that this is sadly how it works (with few exceptions). We all know that the pharmaceutical and food manufactures are among the top lobbying groups in the nation. There is much more money to be made in keeping people “sick” and hooked on their products, than keeping them healthy.

I will note, however, that I was pleased to see that there is a bill in the California legislature authored by State Senator Bob Wieckowski that would require warning labels on foods containing artificial dyes in that state. Hopefully that bill will pass sometime in 2022 and the labels will change sometime in 2023. However, I am not too optimistic. I was living in California when they could not even convince the legislature or the general public to pass a non-GMO labeling law back in 2016.

As I stated earlier, these special interest groups are just too large and have all the money needed to prevent anything that may decrease their profits. So, if you live in California (and reading this in 2022) and would like to see that bill, SB 651 pass, call your state senator and assemblymember to let them know why it’s important for them to vote, “Yea” if and when they are given the opportunity. (Interesting footnote: The state of California has been trying to pass a socialized medical system for years, which again, speaks to my earlier point regarding the interests of certain nations.)

Regardless of legislative outcomes, proper label reading will empower you to make your own decisions, and not be at the mercy of bureaucrats and legislators who may not have your best interest at heart.

What are the alternatives?

Just like many of the countries around the world that have opted out of synthetic food dyes, there are many ways to get your food and drink to look more exciting. Sure, these plant-based colors may not be quite as vibrant or last as long, but at least they won’t harm your family.

Natural food colors can come from lots of items found in the produce and spice aisles of your local grocery store. Carrots, beets, strawberries, raspberries, paprika, saffron, turmeric, red cabbage, spinach, matcha and of course blueberries are all great examples that can color your home baked goods.

Vani Hari, a nutritional blogger also known as The Food Babe4, has put together some amazing graphics that illustrates how certain products’ ingredients vary in different parts of the world. (Thank you, Vani for doing this and sharing it with the world!) Not only will you notice that they don’t use artificial food dyes, but other ingredients that I talked about over the weeks including high fructose corn syrup, artificial sweeteners and hydrogenated oils have also been removed.

Personally, I don’t have the time to make my own food coloring or decorating sprinkles, so I buy them from my favorite stores that carry organic and natural products, such as Whole Foods and Trader Joe’s. Note: Not everything in those stores are natural, so you still must look at the labels. It’s just that most regular stores do not even sell the good stuff.

You can also purchase them online. Here are some natural food colorings and sprinkles that I recommend that are better alternatives.

There’s no doubt, unless your child attends a birthday party hosted by parents who are extremely committed to keeping the healthiest household possible, your children will encounter their fair share of artificial food dyes pretty much every weekend they celebrate the anniversary of their friend’s trip around the sun. That said, you can teach them the value of making good choices without them feeling deprived. For example, they can choose the section of the cake without the yellow or blue flower or their friend’s name. Empower them to choose the parts that are all chocolate or vanilla (this of course does not mean that those pieces would be free of corn syrup and hydrogenated oils, but at least you would be eliminating most of the artificial coloring).

While more independent research is needed to prove that artificial food dyes may be harmful, there is more than enough evidence from parents noticing differences in their children when they consume the dyes from when they don’t. And like I’ve stated in the past, just because something may be deemed safe, does not mean that it is healthy.

As I’ve stated in my previous messages, a diet rich in natural whole foods, with limited to no processed foods, will set you and your family up for success. As one of my mentors, Dr. James Chestnut states, poor health is not always the result of, “bad luck, bad germs or bad genes.” In many cases, it is bad choices. Whenever possible, choose natural, choose organic and choose healthy. 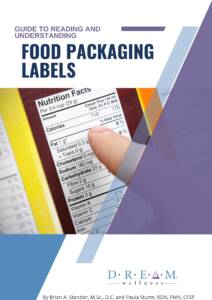 Who’s On First… What’s on Second?